From April 24 – April 28 the New York Times and CBS News polled 965 Americans regarding their views on security issues after the Boston Marathon bombings.

One of the questions revolved around the installation of surveillance cameras in public places: 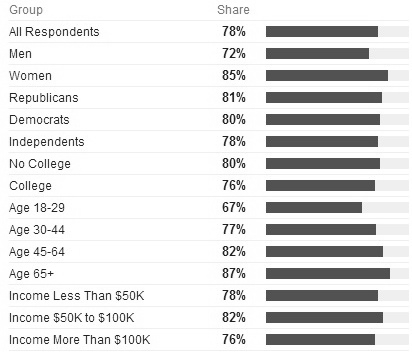 Americans typically don’t like the idea of being spied on, but most want to know that there is a sense of safety. This is reflected in the fact that security was more important as the age of the respondents increased, as well as the increase of their income bracket up to $100,000 annually.

Conversely, 18-29 years had the least desire to be spied on for the sake of security, but still held at 67% favor to the increase of the use of surveillance cameras in public places.

This survey question also posed the idea of more cameras being installed in “public places”. Understandably, anywhere that is not your home might be considered a public place in a court of law. Personal rights are definitely compromised to some degree when someone has the ability to watch your every move – especially as surveillance cameras are increasingly becoming more accurate with greater long range ability.

– – – – –
Our take is this. Some government institutions need to be watched over and protected as well as some public environments. Federal buildings, public schools, public libraries, as well as shopping malls, private schools, concert venues and sports arenas are a handful of these necessary security zones. There is a certain amount of responsibility that government and private organizations need to carry to ensure the safety of their patrons and products.

Surveillance systems are tools of the trade. Security camera personnel with the ability to act upon the observation of a threat must be sanctioned together for maximum public safety.